All of our Dew Point Meters use COSA Xentaur Hyper 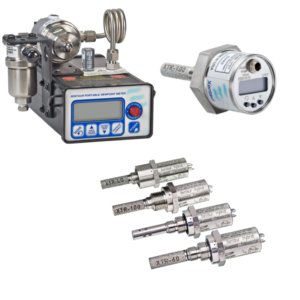 The COSA Xentaur Hyper-Thin-Film Technology is based on major advances in thin-film technology and metal oxide sciences. It provides measurements with a sensitivity several orders of magnitude larger than of those made with all other technologies. HTF sensors are free of drift and insensitive to temperature changes over most of their range.

The HTF and all other aluminum oxide sensors share the same basic operating principle: the capacitance measured between the sensor’s aluminum core and a gold film deposited on top of the oxide layer varies with the water vapor content in the pores of the oxide layer. Three fundamental structural improvements in the oxide layer give HTF sensors much increased sensitivity and stability: HTF sensors have much thinner oxide layer, a better defined barrier layer between the aluminum and the aluminum oxide and a unique pore geometry enhancing the entrapment of water molecules.